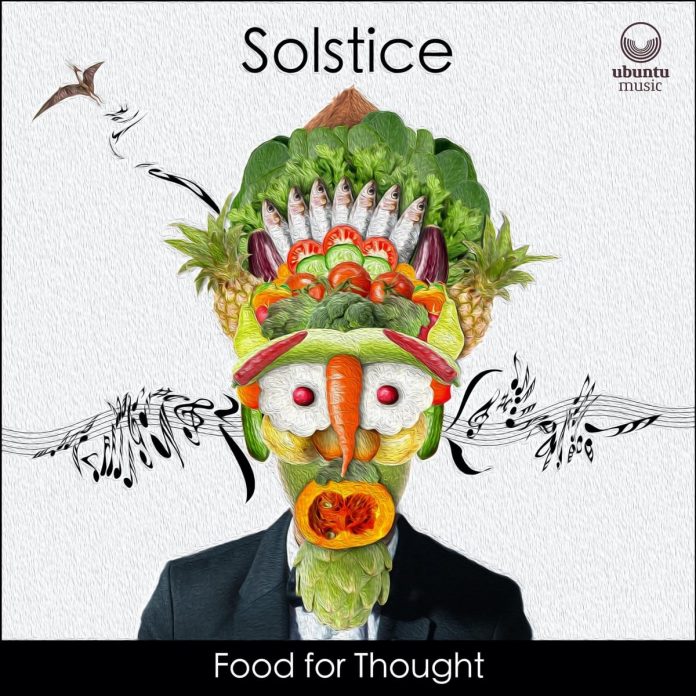 According to the press release, the group Solstice is a collaboration between six like-minded bandleaders and composers who share a love of contemporary jazz, fine food and wine. The music for this release developed over a long period of time as the six musicians were touring with the music from their first album, Alimentation.

Reed soloist Tori Freestone thinks that at first listen it will sound more like a rock album than a jazz one. Tori describes it as “contemporary jazz with strong elements of prog-rock, a dash of Brazilian, a smattering of world music, an infusion of folk and a pinch of classical music”. I heard free improvisation, contemporary jazz licks, wordless vocals and a rather full, esoteric group sound.

Hermetica, the first track, sets the mood and style that continues through the record. Brigitte Beraha uses her flexible voice like a soprano instrument, splattering wordless vocals through most of the seven-minute selection as the rhythm section drives forward and, a little later, Tori Freestone plays an intense flute solo which sounds like an extension of what Roland Kirk was playing in the 60s but without additional instruments round her neck. Echo is used effectively on most of this music.

Other pieces utilise contemporary-style tenor and soprano saxophone solos and there are more conventional straightahead solo segments from John Turville on keyboards, Dave Mannington’s bass and Jez Franks’ guitar. The overall effect is rather like an avant-garde jazz soundscape where all the instruments and voice blend into one collective sound.

The music presented is certainly different to the mainstream and will please followers of tightly structured free jazz. All the compositions were composed by the group, one each by Franks and Turville and two each by Beraha, Freestone and Mannington. Drummer Hart stayed behind his drum kit and joined in the experimental improvising but did not write any music.

It is all wildly inventive, imaginative, structured and way out there; it might be a little too “way out” for some jazz ears. A different, brave, experimental programme of contemporary jazz.

Bruce Crowther - 26 June 2021
Unusually for this fine singer, the set list on this, her sixth album, draws neither on the jazz repertoire nor the Great American Songbook. Instead, Judy Wexler has selected...