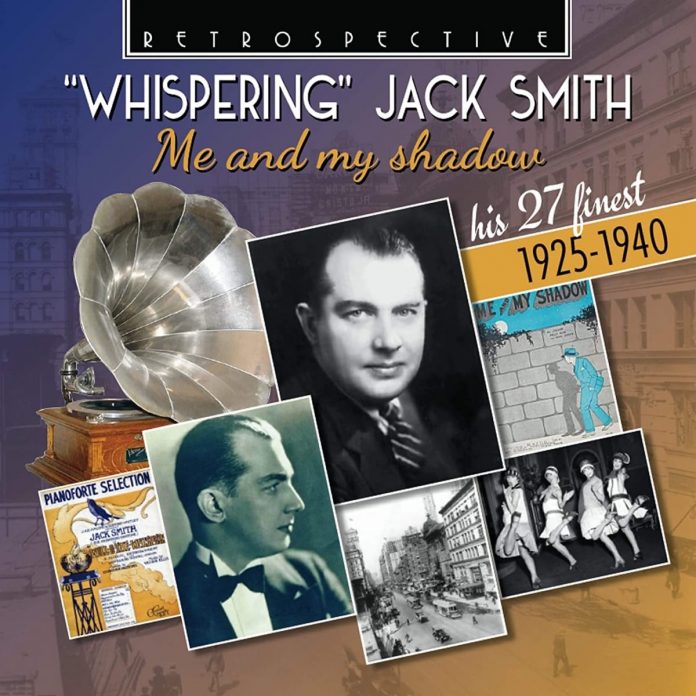 In Jazz Journal terms “Whispering” Jack Smith is precisely the kind of performer guaranteed to separate the men from the boys; indeed there will be those who will balk at his very presence here. No matter. JJ, certainly during the years I have been writing for it is nothing if not liberal and I’ve filed more than my share of critiques on performers I’d expect to see performing at the Café de Paris rather than Ronnie Scott’s and perhaps none more so than “Whispering” Jack Smith.

He is superglued indelibly to what Scott Fitzgerald called The Jazz Age, so much so that I feel I should be wearing a skimmer and racoon coat and arrive in the rumble seat of a Stutz bearcat and fight my way through a knot of Marathon Dancers to say nothing of Shipwreck Kelly, sitting atop his flagpole, in order to catch Jack’s act.

Even the subtitle, 1925–1940, is trifle misleading given that 26 out of the 27 titles were recorded in the 1920s with only the very last track dating from 1940. On six of the selections (tracks #2, #3, #4, #8, #9, #19) he accompanies himself on piano albeit entirely without distinction; elsewhere he relies on small groups and even, on tracks cut in the UK, Carroll Gibbons and the New Mayfair Dance Orchestra.

On the plus side, at least in my case, he invariably includes not only the verse but also extra choruses of the refrain and for good measure he even includes a number, Gimme A Little Kiss, Will Ya, Huh? for which he shared lyricist credit with Roy Turk. It’s fair to say that at least 19 of the 27 numbers will still be remembered today and represent several well-known writers – the Gershwins, Irving Berlin, Harry Woods, Walter Donaldson; there’s even a Berlin song, Sunshine, that’s new to me, but there’s little variety in his delivery and it verges on the risible to hear his Cowardesque enunciation on material like The Birth Of The Blues, albeit another number by Brown, DeSylva, Henderson, The Song I Love is the best song on the album.

Given that people who were in their 20s when these songs were recorded will now be within striking distance of a telegram from the queen it’s difficult to see who is being targeted here. It’s pleasant enough, but in small doses.

Discography
Me And My Shadow; Cecilia, Does Your Mother Know You’re Out?; Gimme A Little Kiss, Will Ya, Huh?; When The Red Red Robin Comes Bob Bob Bobbin’ Along; Baby Face; There Ain’t No ‘Maybe’ In My Baby’s Eyes; Clap Yo’ Hands; It All Depends On You; Blue Skies; The Birth Of The Blues; My Blue Heaven; The Song Is Ended, But The Melody Lingers On; Miss Annabelle Lee; Sunshine; Whispering; I Kiss Your Hand, Madame (ich kusse ihre Hand, Madame}; Ramona; S’ Wonderful; My One And Only; Crazy Rhythm; Funny Face; That’s My Weakness Now; The Song I Love; All By Yourself In The Moonlight; To Be In Love, Espesh’lly With You; I’m Knee Deep In Daisies And Head Over Heels In Love; A Faded Photograph (79.59)
“Whispering” Jack Smith (v, p) with various accompaniments. Various venues and recording dates.
Retrospective RTR 4300

Barry Witherden - 17 April 2019
When I saw Hague’s quintet at Teignmouth last autumn during the tour to promote this album, the leader announced that he had recently unearthed a number of copies of...