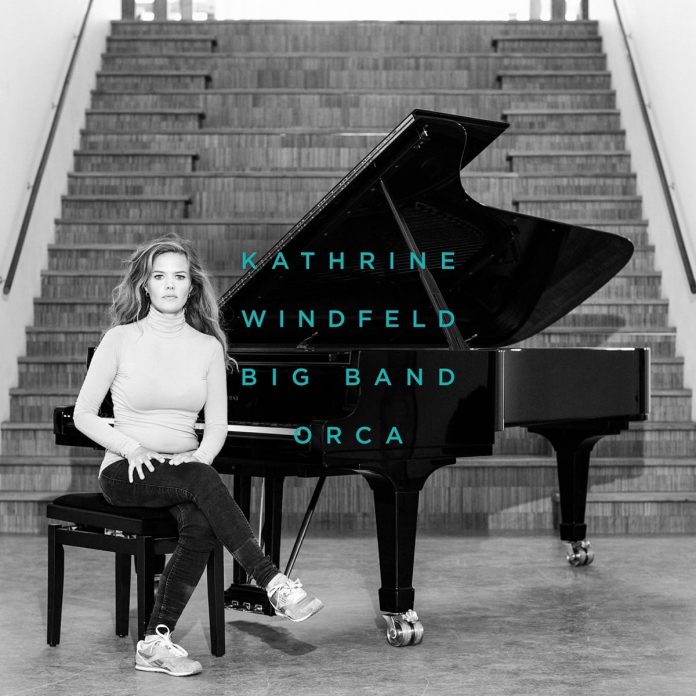 This 17-piece big band is conducted by Claus Sorensen and features Windfeld on piano in the rhythm section. Windfeld also wrote all the compositions and arrangements and is the orchestra leader. The band plays concerts regularly in Denmark and Sweden and this is their third CD.

The theme here is the sea and its many smooth and violent currents. The title piece represents the giant killer whale of that name; a creature of great physical beauty but deadly it its pursuit and destruction of most other forms of sea life. The orchestra plays up the theme with sustained, furious counterpoint as Aske Drasbaek on baritone and Rolf Thofte Lokke on trumpet set up a charging solo chase.

Undertow begins gently but builds up to a darker mood as it progresses and The Lifting starts with gentle, chiming piano chords from the leader but moves towards bleak, darkened statements from the ensemble as Magnus Thuelund’s alto sax leaps out to solo fiercely. Thuelund’s alto returns to spring out with a strong solo statement on Dark Navy where the ensemble is again bleak and churning.

Fish is a track that features bassist Johannes Vaht and drummer Henrik Holst in a quieter, more reflective sequence. Guitarist Viktor Sandstrom also gets a solo look in here. Ferry gives yet another view of the sea and its changing states as Gabor Bolla’s tenor sax erupts from the ensemble.

All the solos charge or float out from the ensembles and although many of the representations of the sea are bleak and threatening, the moods change frequently, and the overall playing of the orchestra is smooth and disciplined. The rhythm section, when it plays alone, is crisp, flowing and swings easily. Kathrine’s piano playing is light and lyrical and she provides a solid rhythmic base, along with her colleagues, for the orchestra.

Kathrine Windfeld was born and raised on the South Funen Archipelago in Denmark, one of the longest coastlines in the country in relation to its size. Her fascination with the sea and its many various manifestations is not surprising given her early life in this picturesque area and she has represented it accurately in her music. Contemporary in approach, this is a fine big band in the modern jazz tradition.

Gordon Jack - 15 December 2019
Cathy Segal-Garcia comes from a musical family and as a young child she played the flute and guitar. She attended Berklee School of Music from 1972 to 1975 studying...