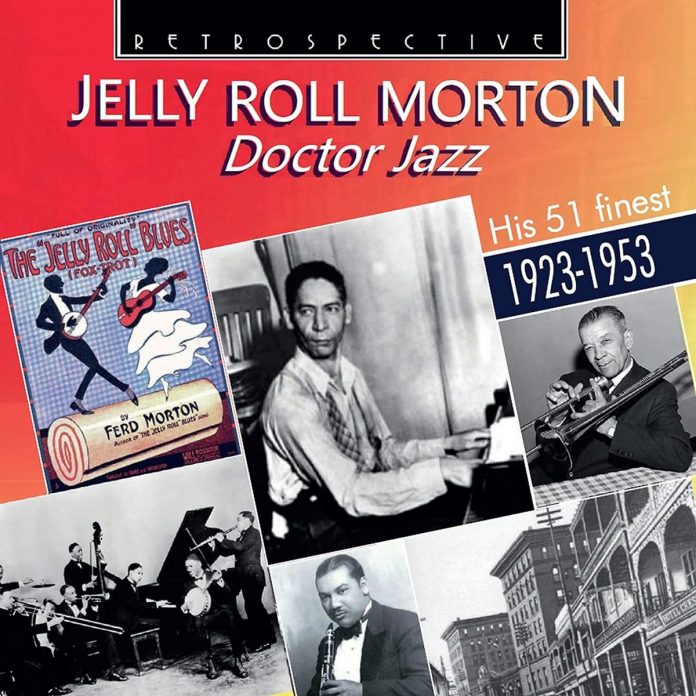 There is an awful howler on the front cover of this Retrospective compilation indicating that these two CDs contain Morton’s “51 finest 1923-1953”, an impossible claim, since he died in 1941 and there is no suggestion in the discographical information that any of the music came from “beyond the grave”.

Having got that out of the way, what we have is yet another reminder (if needed) of the significance JRM had in the early development of jazz. He was an excellent piano player but his organising/arranging skills, using some of the finest musicians of his day are almost more significant when it comes to making a full assessment of his place in the jazz pantheon. What also added to the quality of all his early work was the rehearsal time he allowed his players.

Added to this, his compositions were often strikingly different to those of the majority of his contemporaries, in terms of construction and development. Such tunes as Shreveport Stomp, The Chant, The Pearls, King Porter Stomp et al are masterpieces from his book and would be wheeled out extensively by New Orleans bands the world over for many years after these recordings.

It has become heresy to find fault with the Peppers recordings in particular and hundreds of thousands of words have heaped praise on the various line-ups paraded under that banner. For many, jazz simply never got any better than those tracks representing the talents of such musicians as George Mitchell, Kid Ory, Omer Simeon, Barney Bigard, Baby Dodds, Albert Nicholas, Bubber Miley and Wilbur DeParis.

The majority of the material comes from Morton’s time under contract to Victor and their Bluebird offshoot, although the two December 1939 items followed by the three 1940 sides were recorded for General – that trio being the last of his band recordings; his health had taken a turn for the worse at the time.

There is a very useful accompanying booklet with full discography and background notes supplied by compiler Ray Crick. Of course, there is nothing new for Morton admirers but as an introduction to a major figure this collection is invaluable.

Jazz Journal - 29 August 2021
As Richard Williams has observed, Montoliu is a far more interesting pianist today than Oscar Peterson - harmonically more resourceful, more given to subtle humour and with a greater...