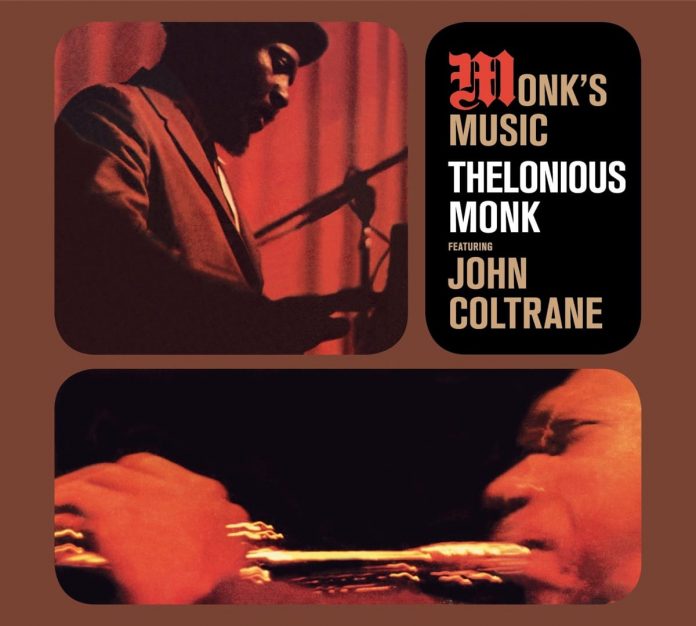 The sessions included here use four of the most distinguished jazz players who all play at their routine best – Monk, Trane, Hawk and Blakey (Monk had recently made his classic album with the Messengers). How could it fail? Additionally a large spread of Monk’s method is included.

Hawk had been at the top of his game for 30 years, but Monk and Coltrane were just coming over the hill as far as the people who bought records were concerned. On this album there’s no sign of a reclusive Monk and he treats his home-grown repertoire with love and delight. Coltrane was a giant of a musician by this time, but even he treats the music with great respect and a concomitant restraint, which, surprisingly, doesn’t seem to affect his flow of ideas.

The opening Abide With Me lasts for a minute and has no improvisation. Monk’s working is dark (presumably his choice, for all the arrangements are by Gigi Gryce under Monk’s supervision) and might almost have been designed to give jazz fans something to have played at their funerals (note: not at mine, please).

Trane seemed to be bobbing about in and out of Miles’s and Monk’s groups. This time Miles had fired him in October 1957 when narcotics caused him to fall asleep on the stand. “You can come and play for me any time”, Monk told him. Trane did, for five months. There was little official recording of that quartet apart from this album. The septet tracks are uniformly excellent, with Hawkins, who didn’t need to change his course to work with Monk, outstanding alongside Trane. Ray Copeland is a revelation, with a tasteful influence from Miles and an easy understanding of Monk’s oeuvre. Monk was taken ill during the session, and returned with everyone when he was well to complete the programme. (The dates below are correct. Those in the liner are wrong).

Monk made a living improvising on his own compositions and these versions are satisfyingly long, with Monk sounding fresh throughout. Consequently there’s a dazzling selection of nine of them here, of which Trinkle Trinkle is a fine example. It’s fiendishly difficult to work with – no doubt why it’s lesser known. The beautiful 32-bar Ruby My Dear features Hawk and is the converse and the version here is very beautiful. Monk had gone home ill when Gigi’s 13 minute Blues For Tomorrow was recorded to salvage the session. Never mind the eccentricities, relish the music.

“They wanted me to pose in a monk’s habit, on a pulpit, holding a glass of whiskey. I told them no.” Consequently there is a brilliant colour photo of Monk in his seven-year old son’s toy cart.