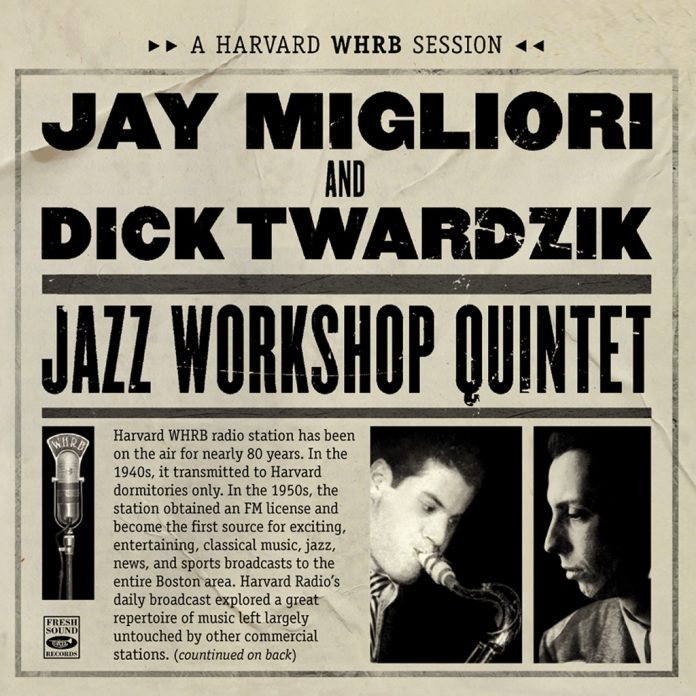 Jay Migliori and Dick Twardzik were part of a vibrant jazz community in Boston during the early 50s which included Serge Chaloff, Joe Gordon, Charlie Mariano and Jacki Byard.

At the time of this recording Migliori was dividing his time between the Berklee School of Music and the Storyville club where Chaloff was the leader of the house-band. Twardzik was studying with Serge’s mother, the celebrated Madame Margaret, who was a professor at the New England Conservatory. He also played at Boston’s Hi Hat occasionally with Charlie Parker who considered him to be a genius and Uptown has released some of their performances there on UPCD 27 42.

This previously unissued material is an important addition to the pianist’s sadly slim discography. It was recorded four months before his celebrated contribution to Chaloff’s Fable Of Mabel (Mosaic MD4-147) which was followed a month later by his seminal Last Set album – his only date as a leader (Lonehill Jazz LHJ10120).

The tenor man went on to spend most of the 50s with Woody Herman and much later he became a charter member of Med Flory’s Supersax. His Lester Young-like sound by way of Bill Perkins makes a strong impression here, especially on uptempo numbers like Get Happy and Ryan’s Love.

Dick Twardzik, who died a year after this date in a lonely Parisian hotel room, was already one of the music’s most original and distinctive pianists with his own unique time-feel complete with voicings that occasionally reflected modern classical composers such as Erik Satie and Béla Bartók.

Jordi Pujol has added a brief segment of Twardzik’s Bouncin’ With Bartok as a bonus, here performed by his friend Bob Freedman. He composed it at the age of 17 but it has never been recorded in its complete form.

Bruce Lindsay - 25 September 2019
The classic album from Evans, LaFaro and Motian gets another outing, this time on the Jazz Images label, whose USP is the use of photographs by the French photographer...