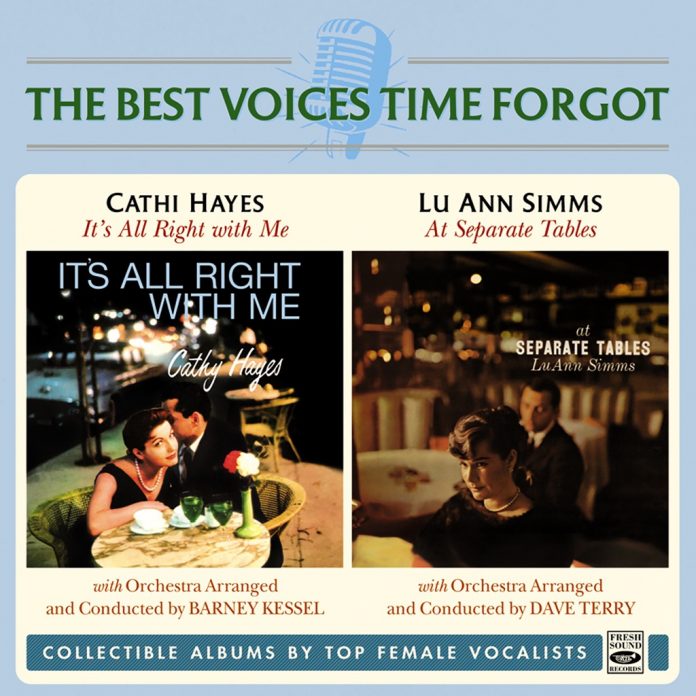 Continuing Fresh Sounds’ The Best Voices Time Forgot series, this double set unearths another two singers whose names are likely to be little known, if at all. Here, happily, they are lifted out of the sands of time and given a welcome airing.

Milwaukee-born Cathi Hayes started out in a five-piece vocal group and spent some of her career singing at Dean Martin’s restaurant, Dino’s. Here, on the only album she recorded, she is cool and bopping, a real hepcat, backed by a tight, tense brass section. Chris Connor is immediately brought to mind with her smooth, summery sound and precise, on-the-nose diction; Hayes’ vocal yawns wide with only a tease of vibrato. Refreshing, off-the-beaten-track song choices include the disarming You Smell So Good, backed by minimal, sparkling guitar from Barney Kessel (who also arranged all the charts here).

Hayes’ joy in her craft is palpable, and the orchestral backing tasteful (no overzealous strings here), and while songs like If I Were A Bell are deliciously light and swinging, her vocal also surges and ebbs with appropriate emotion on ballads like Last Night When We Were Young.

Next up on this set is Lu Ann Simms from New York State, whose popularity during the early 50s translated into a best-selling Lu Ann Simms doll (pictured in the liner notes). Her vocal is quite different to Hayes’ – a trilling, caramel-sweet, slightly corny sound in the Doris Day tradition, but edged with a little sharpness reminiscent of Dinah Washington.

This is a sleepy, lullaby land of an album, with cooing backing chorus and so much echo on Simms’ vocal she could be singing from the bottom of a well. The tracks proceed at an extremely leisurely pace, in sweetly soporific style; but depending on your mood, this may be no bad thing. When Simms’ vibrato is given full rein, it’s gloriously multi-tonic.

These two albums go to show how much the singer whose name does become known is a random affair – why have we heard of Chris Connor but not Cathi Hayes? Well, for a million different reasons, but the relative quality of their voices isn’t one of them.

Discography
(1) The Angels Sing; Blue Moods; You Smell So Good; Happiness Is Just A Thing Called Joe; Wonder Why; Tangerine; If I Were A Bell; Last Night When We Were Young; Down In The Depths; You Don’t Know What Love Is; My Old Flame; You And The Night And The Music (35.58)
(2) Separate Tables; I Only Have Eyes For You; There Will Never Be Another You; The More I See You; No Love, No Nothin’; My Dream Is Yours; You’ll Never Know; I Wish I Knew; I’ve Got To Sing A Torch Song; You’re Getting To Be A Habit With Me; Ooh That Kiss; This Is Always (26.76)
(1) Hayes (v); Orchestra arranged and conducted by Barney Kessel. Hollywood, CA, 1959. (2) Sims (v); Dave Terry and His Orchestra. New York City, November 1958.
Fresh Sound Records FSR V121