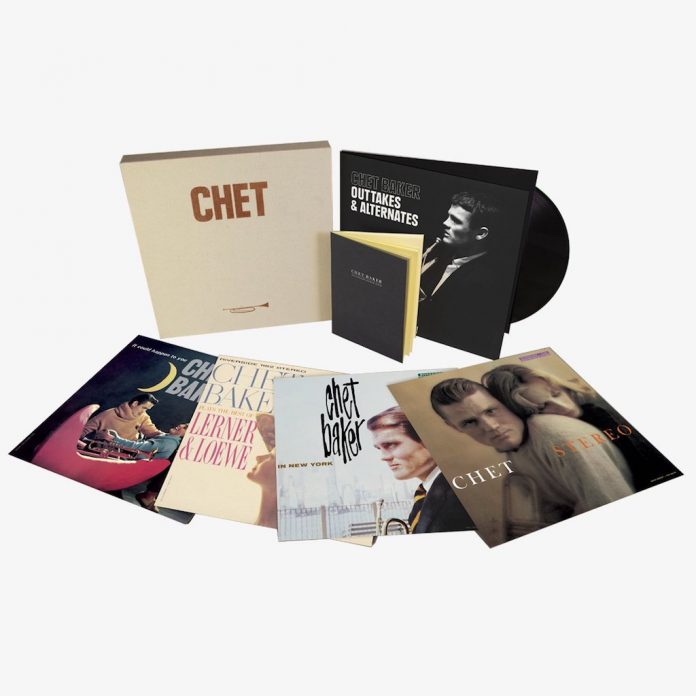 These LPs were set up by Orrin Keepnews of Riverside Records following Baker’s huge success with Gerry Mulligan in 1952/53 and his part-successful, part-disastrous tour of Europe in 1955/56. In 1958 Baker was a hot property and Riverside were the new kids on the block, snapping at the heels of established independent record companies like Prestige, Blue Note and Savoy. They did it very well, coming to modern jazz late but snapping up Thelonious Monk, Johnny Griffin and Kenny Drew among many.

Craft Records have here collected the four LPs Baker made for the company and added a fifth, full album of previously unreleased material or alternate takes into an attractive box set with notes by Doug Ramsey. Cutting from the original analogue master tapes, Craft have produced excellent sound on these vinyl discs and housed them in facsimile covers complete with shiny fronts and eggshell rear covers, much like the first issues. The music was fine but Keepnews was not hesitant later in spelling out the troubles he had endured with Baker, even though when the studio lights went on all went well.

The first LP is devoted to Chet singing and he uses his soft, somewhat gender-neutral voice to interpret several standards including the surprisingly rarely heard Rodgers & Hart, Do It The Hard Way. The phrasing and jazz feel are spot on and he is helped by sympathetic backing from Kenny Drew on piano and top bass and drum men like Sam Jones, Dannie Richmond and Philly Joe Jones. Most selections feature the plaintive, soft-focus trumpet that Baker initiated, his jazz phrasing precise, the individual solos short gems of brass creativity. That lyrical, laid-back trumpet sound was completely unique and personal to him. There is a lot more of that smooth, polished trumpet sound on Chet, the second LP in this collection, and here he has the support of some sturdy East Coast heavies like Pepper Adams, Kenny Burrell, Bill Evans and Philly Joe on three pieces. The focus is still on the slow romantic ballad although the tempos do vary and there is plenty of strong solo work with Baker’s warm-at-the-edges but vital trumpet solos to the fore.

LP3, Chet Baker In New York, has the trumpeter in brisk, harder than usual mode, shaping up his chops to compete with the likes of Johnny Griffin and with a fierce NYC rhythm section driven by Al Haig, Chambers and Jones. Surprisingly to some, perhaps, he blends in very well and the contrast between Griffin’s hard-edged tone and Baker’s more ethereal trumpet sound works very well indeed. Baker was undoubtedly influenced by Miles Davis, witnessed here by his abandonment of the bridge on When Lights Are Low, just as Miles had done, but the two were never the same regarding sound. Baker was warm and relaxed with a cutting edge on build ups whereas Miles was lyrical but always with a feeling of barely controlled tension in his tone. Even so, Chet In New York demonstrates, if nothing else, that the very best of the East and West Coast musicians were not so very different at all when playing together in ideal conditions.

Chet Baker playing Lerner And Lowe compositions is certainly a winner if for no other reason than he and his producer avoided the temptation to make it another My Fair Lady exercise. There are four selections from that blockbuster musical but also some tasty readings of music from Brigadoon, Gigi and Paint Your Wagon. Almost Like Being In Love and Show Me are uptempo romps with Baker at his inventive best and fine contributions from Zoot Sims, from Herbie Mann’s flute and in the dark, mahogany baritone sax stylings of Pepper Adams. Bill Evans is back on piano on four tunes and a young teenage drummer named Clifford Jarvis swings lightly, mainly with brushes, but cuts loose occasionally. This was his debut album. There are more slow, haunting ballad readings here for contrast with Chet soft and lyrical on Heather On The hill and I Talk To the Trees. Baker’s trumpet is winsome on I’ve Grown Accustomed to Her Face and, really, the entire session achieves a ripe, slow-burning harmony with some well-balanced solos from Baker, Zoot and Pepper. It could be said to be East meeting West and finding they are compatible.

A bonus here is the full LP of outtakes and alternates. Chet offers further personalised vocals on While My Lady Sleeps and The More I see you, the latter featuring the trumpeter on harmon mute but being much less intense than Miles Davis. This material was only issued much later in the form of additions to previous CD issues or on a compilation album. Best of the bunch is a slow Soft Winds with just Haig, Chambers and Jones and a nine-minute Early Morning where Baker stretches out with contributions from Adams, Herbie Mann on flute, Kenny Burrell, Chambers and Jones. Chet had a difficult, troublesome life but in the studio or on stage he could be sublime. There are plenty of examples of that on these five handsomely produced vinyl LPs.

Simon Adams - 27 February 2019
Like many of my generation, I grew up with Alexis Korner, religiously tuning in every Sunday night for his Blues and Soul Show on Radio 1 to hear his...

Jazz Journal - 27 July 2019
With his undoubted ability to cater to the public's desire for fast food in friendly surroundings and his idiosyncratic feeling for dietary variety in jazz, Peter Boizot, the impresario...