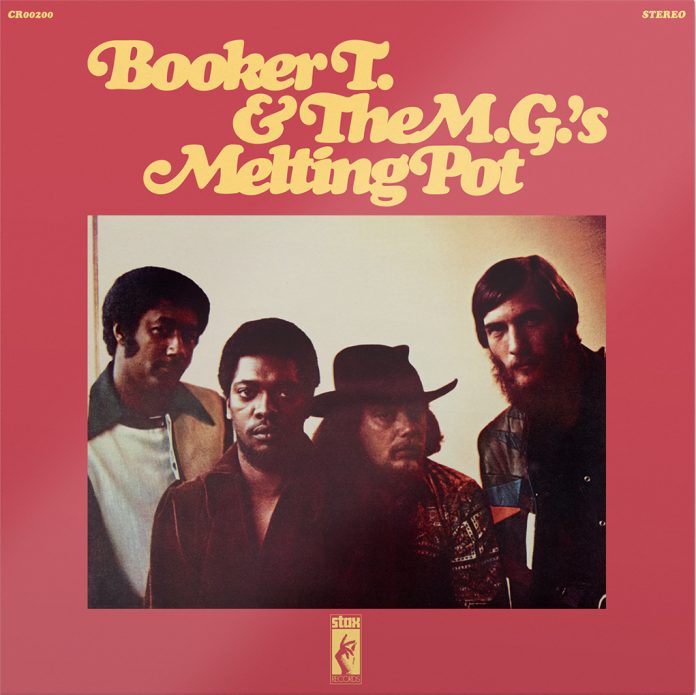 Melting Pot was the last LP to feature the original line up of the M.G.s and they managed to end on a high note with an album of the same musical quality as their previous releases. Beginning with the title track the easy pulse and steady flow of the solos is not unlike their first, hugely successful debut single Green Onions.

This band was always one of the best instrumental R&B outfits and they started, and continued, as they meant to go on. Melting Pot was also issued as a single but much shorter than the eight minutes plus version here. Booker takes control from the start on organ, filling out with plump, juicy chords as Cropper begins his guitar solo. Although basic blues licks are all through this release they are played straight in the tradition with no surplus overblowing or attention-grabbing sounds.

Back Home starts off at a trot but slows down a minute or so in to a slow, downhome blues exercise with Booker moving to the piano and the rhythm team walking beside him. This is an attractive, straight blues rendition with good guitar and piano workouts. Kinda Easy Like maintains the slow, pulsing mood of most of this material with organ riffs and solid guitar work from Cropper. Hi-Ride clips along merrily without fireworks of any kind and LA Jazz Song again presents laidback but pleasant guitar and organ solos. Sunny Monday ends the session on a free and easy, hypnotic, pulsing groove.

Although they reformed with different personnel after this recording Booker never quite managed to regain the steady, pulsating, hypnotic music-making that that this session and their other LPs produced. This 180-gram LP is all analogue with excellent sound and up to the standard that Craft have maintained with their recent LP reissues.