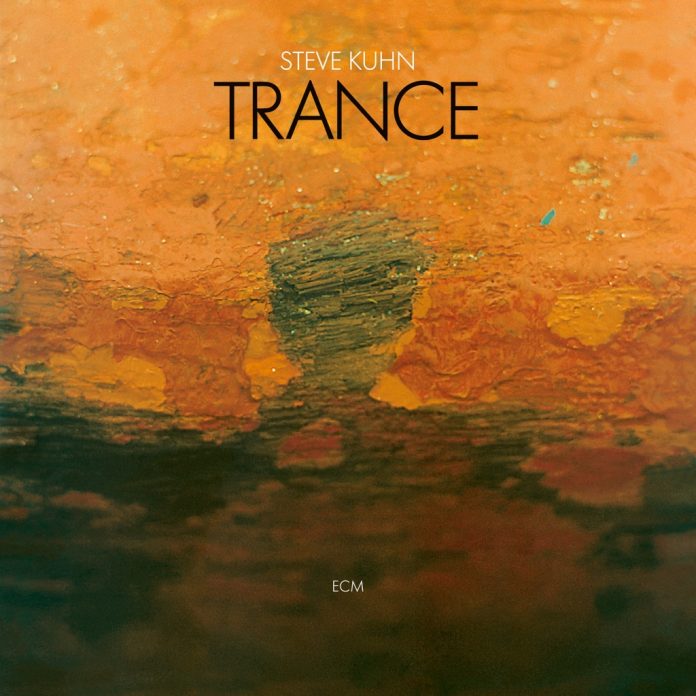 The opening title track lives up to its name with Steve Swallow’s hypnotic ostinato bass guitar patterns underpinning Steve Kuhn’s dreamy modal piano, which combined with sparse key changes renders the piece near to the minimalism of Terry Riley’s A Rainbow In Curved Air (CBS, 1969) or Steve Reich’s Six Pianos / Music For Mallet Instruments, Voices And Organ (Deutsche Grammophon, 1974) or, at a pinch, various sections from Soft Machine’s Third (CBS, 1970). A Change Of Face is much more straightforwardly jazzy, in a very Chick Corea/Return To Forever frame of mind but just as equally appealing, Kuhn here exchanging acoustic for electric piano.

Squirt and its successor The Sandhouse noticeably differ from the album’s other tracks. They are exploratory and loosely defined within an avant-garde framework. However, they still engage; Sue Evans and Jack DeJohnette’s percussive interpolations in both pieces play vital roles both in reinforcement and propulsion of the piano extemporisation.

But seemingly Kuhn cannot resist the call of rhythm and the Latin-esque Something Everywhere is one perfect example. Swallow’s fluid bass guitar solo here is exemplary and immersive. Silver is a short acoustic piano solo oscillating from thunderous bass notes to graceful melodic lines. The only oddity here is Life’s Backward Glance which involves Kuhn reciting echoey words beginning “It was a dark and stormy night” whilst channelling Jim Morrison’s melodramatic voice.

Kuhn started his career playing with some of the true greats including Stan Getz, Kenny Dorham, Art Farmer and (briefly) John Coltrane. Stylistically he is divergent and nonconformist and Trance, part of 50 reissued albums in ECM’s Touchstones series, portrays at least three different genres. It’s undoubtedly an intriguing album, its diverse nature being just one of its strengths; indeed at times it’s captivating to the point of motivating the listener to hear more of Kuhn’s oeuvre. Perhaps start with Steve Kuhn Live In New York (Cobblestone, 1972) in which percussionist Sue Evans is also featured on this live quartet session.