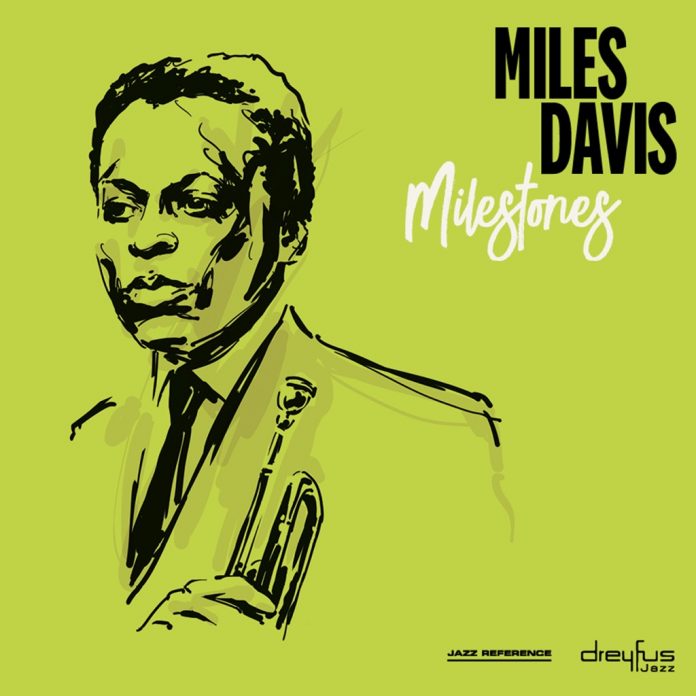 When I asked the editor for a copy of Milestones to review I was expecting the classic 1958 Miles Davis album with Cannonball and Coltrane that many of us of a certain age grew up with. What we have here is something quite different because this Dreyfus reissue is an interesting retrospective of Miles’ early work as a leader beginning with six titles from the innovative Birth Of The Cool sessions.

His nonet was a rehearsal band formed with the intention of getting as close as possible to the subdued harmonies of the Claude Thornhill orchestra with the minimum number of instruments. It was essentially an arranger’s band and particular attention was paid to dynamics with solos elegantly cushioned by sympathetic ensemble backgrounds.

The writers – John Carisi, Gil Evans, John Lewis and Gerry Mulligan – were apparently not paid but at Miles’ insistence their names were prominently posted on a sign outside the Royal Roost for the nonet’s only booking. They worked there for about a week opposite Count Basie and Dinah Washington and although not a commercial success the nonet’s music proved to be hugely influential especially for writers and arrangers based in Los Angeles.

The titles with Charlie Parker on tenor were Miles’s first as a leader. It is not clear why the great man switched from his customary alto but it might have been at Davis’ suggestion. The trumpeter was a regular in Parker’s quintet at the time and Miles possibly wanted his date to sound a little different. Parker sounds like Wardell Gray here and for that reason this session would make a very good blindfold test. As far as I know the only other time he recorded on tenor was with Sonny Rollins on a 1953 Miles date for Prestige.

The Birdland performances are certainly not a typical All-Stars jam session. The accuracy of the ensemble playing indicates some judicious rehearsals or else they were reading music on stage. There is some elegant J.J. Johnson on both Ray’s Idea and Woody’n You. The Paris set is notable for Miles’ melodic variations on Don’t Blame Me where he never refers to the theme at all.

Nigel Jarrett - 17 March 2021
Only American jazz's populous ranks or British provincialism or a combination of both can account for why we might not have heard much of Steve LaSpina, Lynn Christie and...