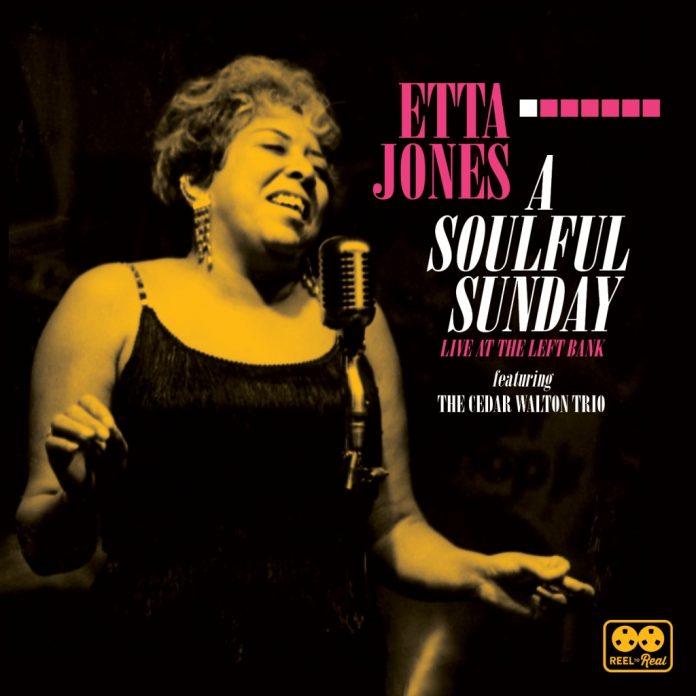 This gem of a recording from 1972 finds Etta Jones in excellent voice supported sympathetically by the Cedar Walton Trio, which is also on top form. Never previously issued and transferred from the original tape reels (with pristine sound quality), this Sunday concert provides a snapshot of Jones’ perennial ability to draw the listener deeply into her live performance.

The set is opened stylishly (and topically) with Cedar Walton on piano riffing on Theme From Love Story (1970). His layered and nostalgic reading of Francis Lai’s composition, which includes a prolonged drum solo from Billy Higgins, sets the bar high for what is to follow, but naturally Jones has no problem reaching it.

There’s a frisson of excitement palpable in the room when Vernon Welsh introduces the main act, pointing out that she’s travelled from Chicago to Baltimore that day to do the concert, and will be travelling back to Chicago that night – a glimpse of the singer’s busy lifestyle.

From the opening notes of Sunday you know you’re in the presence of a professional. Jones reads each line of a song with imagination, never singing it totally straight, and wringing each note for all it has to give. You believe completely that she’s speaking from experience when she sings a line like “Friday makes me feel like I wanna die”, so direct and genuine is her delivery.

Across the set Jones takes each melody line for a walk; shaking it out here and there; riding it at her own pace. The song is always in the palm of her hand, while with other singers it can sometimes seem the singer is in the palm of the song’s hand.

The set closes with an impeccable performance of her hit from 1960, Don’t Go To Strangers, which is sung with all the heart-wrenching yearning the song demands. There’s also a pleasingly thick booklet containing essays, interviews and rare photos of the singer. Highly recommended.

Brian Payne - 25 September 2019
Bennie Maupin is probably best known for his association with Miles Davis on Bitches Brew and Herbie Hancock’s Mwandishi and Head Hunters. The Jewel In The Lotus, recorded in...