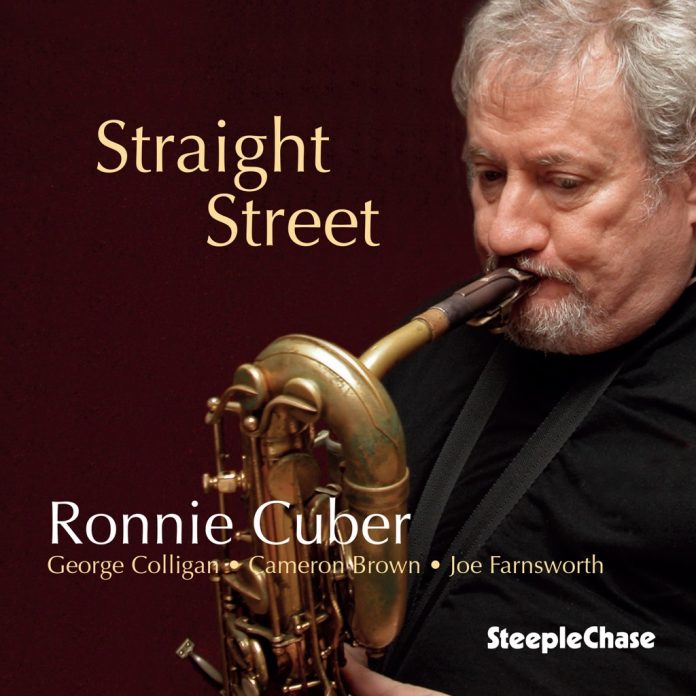 Ronnie Cuber has appeared on more than 200 albums in a long and productive career that began back in 1959 with Marshall Brown’s Newport Youth band. In that time he has only made 20 as a leader which for those of us who feel him to be one of the greatest soloists to ever concentrate on the baritone saxophone is not nearly enough.

Each of his own sessions is therefore a special event and something to be celebrated and Straight Street is no exception. He is joined here by George Colligan, Cameron Brown and Joe Farnsworth, who have all recorded with him as members of the Mingus Big Band.

This live date from an unidentified location opens with a gentle stroll through the familiar harmonies of Whispering – the inspiration for Dizzy Gillespie’s Groovin’ High. Ronnie revisits Scott LaFaro’s delicate Gloria’s Step which he had recorded a year earlier on SteepleChase SCCD 31680. In Cuber’s hands Summertime becomes an extrovert, hard swinging romp quite unlike the lullaby the Gershwin’s envisaged in 1935.

Like all jazz musicians Cuber has found regular inspiration from Jerome Kern’s All The Things You Are. In a Downbeat interview Lee Konitz once said “I could just spend the rest of my time playing All The Things” and a few months before he died, Bud Shank told writer Ted Gioia that he never felt he had exhausted its possibilities. Ronnie featured it on his first solo album in 1976 – Cuber Libre (Xanadu 906079) where he used Kenny Dorham’s clever contrafact Prince Albert instead of Kern’s melody. He returned to it on his 2009 album Ronnie, performing it at a finger-busting tempo of 80 bars to the minute – probably not what the composer had in mind when he wrote it for his 1939 musical Very Warm For May.

Here Cuber takes the tempo down a notch but it is still pretty fast and instead of caressing the composer’s lovely melody he offers a highly staccato theme statement. A stop-time chorus is followed by a chorus with just Cameron Brown for company before Ronnie launches forth on one of his best solos of the set.