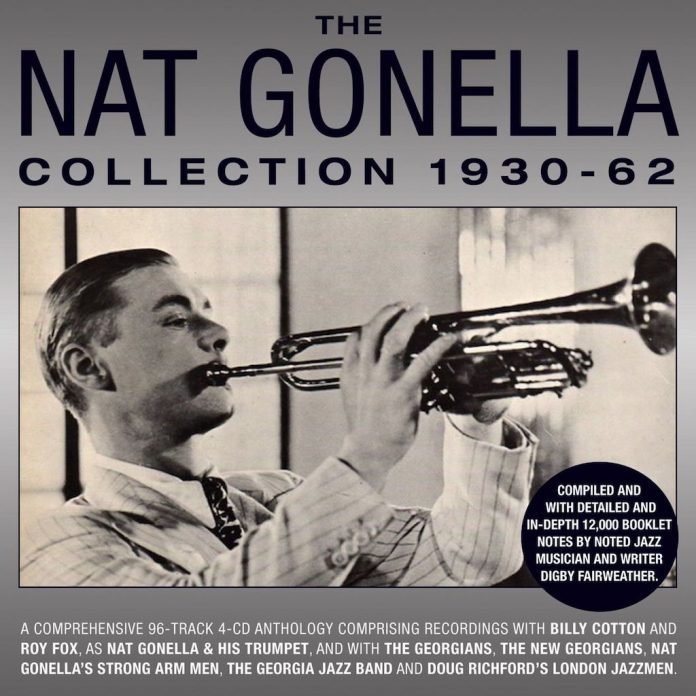 With his spectacular Armstrong-inspired trumpet playing, gruff homely vocals and cheery music-hall showmanship, Nat’s star status in the 30s could earn him £700 a week – a staggering £35,000 in today’s money. His roller-coaster life story is told in absorbing detail in the 43-page 12,000-word notes by Digby Fairweather, a great admirer and later friend of Nat, who formed a close professional relationship and later co-wrote an updated biography.

Born in 1908 in the King’s Cross area of London, Nat had a tough working-class childhood that mirrored quite closely that of Louis Armstrong. When his father died Nat was put into a care home for poor children,where in due course he thrived, eventually leading the school’s brass band on cornet following expert formal tuition from William Clark of the Royal Military School Of Music.

After leaving the school, as his expertise developed, his powerful chops, technical command and confident brio soon attracted attention. In 1929, already an Armstrong devotee, he joined Billy Cotton, making his first recordings in 1930.

The opening track features Nat in a youthful energetic tilt at “New Tiger Rag”. With Billy Cotton and Roy Fox he developed a crowd-pleasing, variety-show presentation with plenty of humour and exuberant vocals, again much influenced by Armstrong. “Oh Monah”, recorded in 1931, became a popular standard of his. (Forty years later, a remake reached number five in the Dutch hit parade.)

Joining Lew Stone and enjoying ever-increasing featured exposure, Nat began to record as a solo star. Doubtless inspired by hearing and meeting his idol Armstrong in July 1932 at the London Palladium he recorded several fine jazz sides later in the year, including on CD1 “I Can’t Believe That You’re in Love With Me” and an impressively close cover of “When You’re Smiling”. “Georgia on My Mind” and “Sweet Sue” from 1934 are also prime examples of just how gifted a jazz musician Nat had become.

Though much influenced by Armstrong’s style of phrasing, with its exuberant upward smears and rhythmic drive, Nat’s stylish ideas are very much his own. His tone is bright and rounded with crisp intonation, and his expressive phrasing, precisely constructed, suggests discipline and control learned in his early military/classical training.

Having formed his own group, The Georgians, in 1935, and with brother Bruts on second trumpet, he embarked on a hectic schedule of touring and recording in the UK and abroad, which was to last until the outbreak of WW2. A selection of these numerous recordings spans CD1 to CD3. High Spots from these peak years include a spirited “Tiger Rag”, striking arrangements (by unknown hand) of “Strange Blues”, “I Want to Be Happy” and “Bugle Call Rag” and strong support throughout from Hood’s lively piano and the often Hawkins-ish tenor of Pat Smuts. Nat sounds particularly fired-up on the rare Swedish recordings.

CD3 includes the four tracks which he recorded in New York with John Kirby’s band, acquitting himself well in such star company as Buster Bailey and Benny Carter. The halcyon years ended when the Georgians broke up in 1939, with some disaffection, after finding themselves stranded in Sweden at the outbreak of war. On return, Nat now formed his New Georgians, adapting to changing public taste and updating to big band 12-piece format for the new swing era. Between August 1940 and August 1941 his orchestra made no less than 70 recordings.

The tracks included here make a rather mixed bag, with Stella Moya’s vocals and a really naff arrangement of “Oh Susannah” among the low spots. However there’s an excellent trio version of “The Sheik of Araby” inspired by talented young pianist Norman Stenfelt, who also wrote and arranged  the brightly swinging “Playhouse Party”.

On CD4 we jump forward to 1958 with Nat adapting yet again to a changing scene. Regarded now as something of an elder statesman (though still only 50) he recorded an album in 1958 with a contingent from the Alex Welsh band, and two fine albums for Denis Preston in 1959 and 1961 entitled Salute to Satchmo and The Nat Gonella Story. The latter featured talk-over reminiscences from Nat, outstanding arrangements by Kenny Graham, and excellent backing from truly first-class British jazz musicians, notably Tony Coe, in varying combinations. “I’ve never played better, or in better company”, Nat declared. The whole of the album is included here,together with three lively live recordings by his touring six-piece band.

Nat was to remain active until the late 90s but his golden recording legacy was over by 1962. The well-chosen selection in this boxed set makes a well-deserved and thoroughly planned tribute to a much loved and highly talented pioneer star of British jazz.

John Watson - 06 March 2020
What a pleasure it is to have such a marvellous reissue made available. This 1978 recording received acclaim when first released as a vinyl LP on the Jazz Hounds...