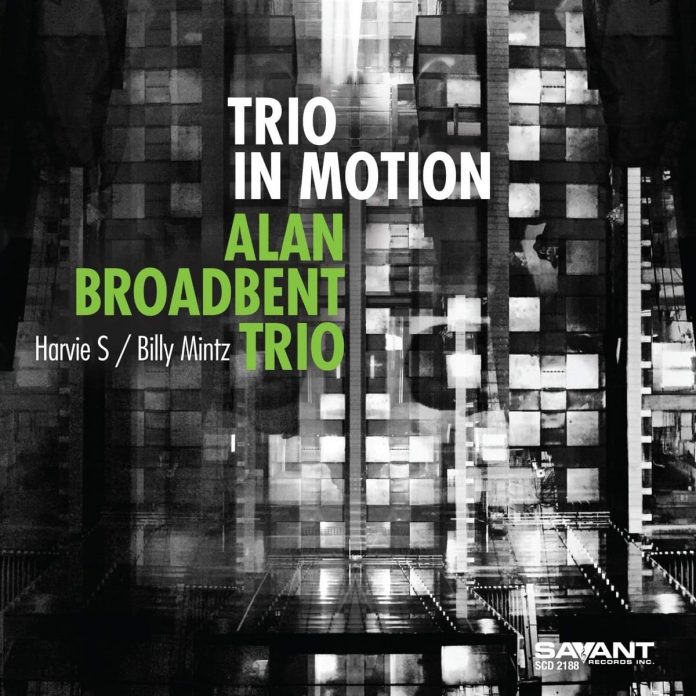 In the midst of his whirlwind career as pianist, arranger, composer, conductor and educator, Alan Broadbent retains a commendable respect for clarity, tradition and detail. The detail is there in his latest trio album and in his concern to let buyers know that the book of songs he’s written with singer Georgia Mancio in its printed form is wire-bound “to stay open”. He’s penned 33 songs with Mancio, and a new album with her, Quiet Is The Star (reviewed here) accompanies the book’s publication.

That could be an essential part of a definition of good jazz. Trio In Motion skips happily through an interesting collation of charts, from lesser-known Charlie Parker to perimeter tunes forever queueing for entry to the American Songbook, spirally bound. Jewelling these masterfully essayed tunes are the examples of Bud Powell and Lennie Tristano, the latter once Broadbent’s mentor.

But the spinning threads and fragmentation of rhythm in Tristano’s Lennie’s Pennies and Parker’s Relaxin’ At Camarillo (more well known) do not represent slavish homage to style but variety in the clarity, vigour and minutiae of presentation. As a songwriter himself on I Hear You and on Sammy Cahn’s Wonder Why, the homage as elsewhere is to melody and its augmentation (echoes of Bill Evans).

Broadbent and Co., with Mintz and Harvie S reminiscent of Oscar Peterson sidemen, are ever on top of their material. They take the liberty of drawing the teeth of Li Hardin’s Struttin’ With Some Barbecue by swopping the Hot Five’s ferocious ensemble for a samba shuffle in which Mintz creates some nice brushwork and Harvie S, as ever, lays strong but supple foundations. The unfamiliar Parker is The Hymn, taken prestissimo as Broadbent chases the simple theme with variable-length phrasing and at one point breathtaking contrapuntal pressure. Moonstones, a composition by all three, is fugitive and florid: everyone feels his way into it, ever sure-footed.

Discography
Wonder Why; I Hear You; Lennie’s Pennies; Struttin’ With Some Barbecue; Late Lament; Relaxin’ At Camarillo; One Morning In May; I Love You; Lady Bird; Like Sonny; The Hymn; Moonstones (55.36)
Broadbent (p); Harvie S (b); Billy Mintz (d). New Jersey, January-June-August 2020
Savant SCD 2188