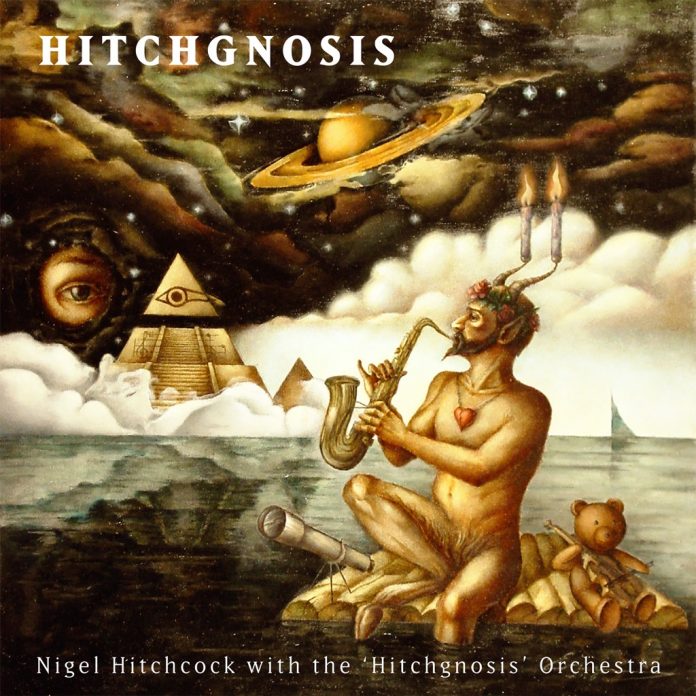 One of the tracks on Nigel Hitchcock’s new album is called Panharmonia, supported in the saxophonist’s liner notes by seven meanings of “pan” including “all” or “all inclusive”. The album itself is a summary of what Hitchcock says he’s learned about life and music, and this track has what he calls “a folky feel”, relating to the five years he spent on the Isle of Skye.

In more than an hour of music composed and arranged by him, the 10 tracks are played variously by symphonic forces recorded on three dates between 2007 and 2013. Five of the cast involved have died since the project began, one of them the LSO’s principal trumpet, Maurice Murphy, in 2010. Murphy had won fame as a featured soloist on film scores, rather like Hitchcock has in balancing jazz gigs with support for Tom Jones, Robbie Williams, Cher, Mark Knopfler and others.

Hitchgnosis is a journey along the time-space continuum partly based on a New Age reading of Zecharia Sitchin’s stories of the Nephilim and Adam and Eve, the latter transmogrified to include super-ancient astronauts. Hubble’s View, Candlemas, and Skye Blues are played by an orchestra of more than 50, including Murphy and co-trumpeter Derek Watkins, another cross-cultural multi-tasker who died in 2013. (The album is dedicated to those two and Rick Taylor, Chris Dagley and Steve Price. Trombonist Taylor was a friend and confidant of Hitchcock’s from their NYJO days.)

But this is no sax-with-strings sweetener. Hitchcock’s trademark robustness and allure ride orchestral forces managed with aplomb and, in at least four cases, with structure aforethought: Heart In A Tango is tripartite with a central “baroque” section. Instead of allowing the sounds at his disposal to expand freely he concentrates and shapes their movements, as on Dance Of The Nephilim and the beautiful Enki’s Dream with the smaller of the two roll-calls. Hitchcock has always written a mean tune, not least Blaven Mist in honour of a Skye peak, and In Your Eyes, a reworking from his SmootHitch album in which the original funkiness is assuaged.

Some jazz musicians or their promoters have aspired to “classical” models in pursuit of a genre shift or commercial gain. It’s rarely successful artsitically. Hitchcock on the three populous tracks probably had more battalions than he needed to avoid muddying the waters but on the album as a whole he creates an interesting amalgam of his two musical personae.

Mark Youll - 12 March 2020
The title and eight tracks on this new disc from Kit Downes (his second for the ECM label) were inspired by a phrase the pianist discovered in director Grant...